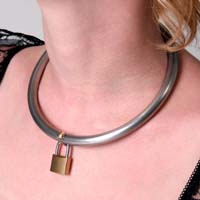 A Turian collar from dreamstrike.com 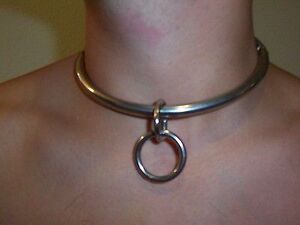 A Turian collar is a rigid metal collar which is circular in cross-section, and so has an overall torus shape. The term was invented by John Norman for use in his Gor series of science-fiction books (where the adjective "Turian" refers to the city of Turia in the southern hemisphere of the planet Gor, which has some cultural practices different from those of the main northern-hemisphere cities). In the following quote, it is contrasted with the closely-fitting cylindrical collar of the northern cities:

"The Turian collar lies loosely on the girl, a round ring; it fits so loosely that, when grasped in a man's fist, the girl can turn within it; the common Gorean collar, on the other hand, is a flat, snugly fitting steel band. Both collars lock in the back, behind the girl's neck. The Turian collar is more difficult to engrave, but it, like the flat collar, will bear some legend assuring that the girl, if found, will be promptly returned to her master." - Nomads of Gor[ext][1]