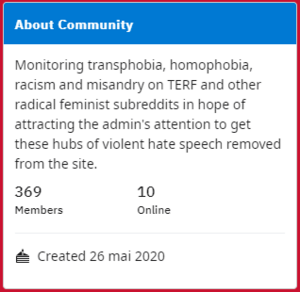 Despite its modest size the Pink Pill Watch has had tremendous success taking down feminist hate speech. Within a few weeks of operating a significant number of major misandrist subreddits were banned from the platform.

The pro-male purge began only 2 days after the creation of the Pink Pill Watch subreddit as r/pdwwatch, a tiny subreddit created by a female psychopath to harass and stalk members of the PMC was banned on 28 May 2020.

On 17 June 2020 a small subreddit named r/BlackPillMisanthropy that posted violent misandry was banned.

Pro Male Vendetta then announced his involvement with the Pink Pill Watch.

On 18 June 2020 the Pink Pill Watch scored its first David vs. Goliath victory as r/BlackPillFeminism, a very active subreddit of over 3,000 subscribers that regularly made posts about killing men, wishing rape on men and castrating male children was banned. On the same day all the moderators of r/TheFairerSex, a 7 year old misandrist subreddit of over 8,000 subscribers adjacent to r/BlackPillFeminism, were permanently banned from Reddit, and the subreddit's comment sections locked down, making it virtually dead.

Blackpillfeminism calls for toning down violent speech within their subreddit

Major radical feminist subreddits including r/PinkPillFeminism, r/GenderCritical and r/FemaleDatingStrategy absolutely freaked out over the ban of r/BlackPillFeminism and gave instructions to their users to restrain their hate speech, specifically to avoid calls for murder and attacks on male children. A power struggle emerged in r/PinkPillFeminism over disagreements about the reform needed for the subreddit to avoid a potential ban and some moderators were sacked in the process.

In the next days evasion subreddits set up by r/BlackPillFeminism exiles like r/XXFront were cleansed by Reddit.

The radfem armageddon finally arrived. Reddit had planned a massive cleansing operation specifically targeted at alt-right-adjacent subreddits for a long time. On 29 June 2020 over 2,000 subreddits were cleansed from the platform. Among them r/BanFemaleHateSubs and r/BlatantMisogyny, hate subs that were harassing the Pro-Male Collective. More importantly, r/GenderCritical, a subreddit encouraging the abortion of male fetuses for the sole reason of their sex that was with over 65,000 members the most active radical feminist forum in the world was banned. r/TheFairerSex was finally given its quietus. r/PinkPillFeminism and r/TrollGC went private, closing off to the public and to the vast majority of their own members.

Where to find us

You can join the Pink Pill Watch Discord here.