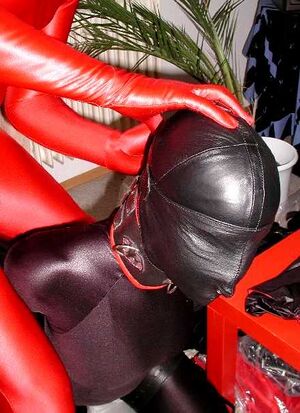 Victim being placed into sensory deprivation

Sensory deprivation is the practice of temporarily 'removing from' or 'depriving someone' from making uses of one or more of the senses.

For total sensory deprivation, one must be deprived of all five senses:

Normally, it is desirable for a bottom to be left with at least one sense, typically touch. With only physical feeling left to experience his/her surroundings, the sense of touch - and its anticipation - is greatly heightened.

This is easily achieved with an effective blindfold or hood. People usually rely on sight more than any other sense, and depriving them of it for more than a few minutes can have a powerful effect.

It can be hard to make sure that someone can hear nothing at all, however well their ears are insulated. Ear plugs and isolation hoods are useful, but rarely 100% effective. A common ploy to get around this is to do what is practicable to block out sound and also make them hear a noise that will overshadow anything else and that their mind will largely ignore after a time. This is most easily done with a pair of headphones connected to a sound source.

The sound source is most effective if using a bland sound, which need not be played loudly. Various sounds can be played from a recording or created from equipment, some of which may be around the home already. The Wikipedia has an article on Colours of noise (technical)[wp].

As with sound, it can be hard to prevent people from smelling things, although a gas mask[wipi] fitted with a good filter will do the job. Otherwise, a continual and overpowering smell that hides anything else will have similar effect. Care must be taken with the choice of aroma as many of the more powerful and obvious ones, such as menthol, can be unpleasantly irritating in large or continual amounts.

This is quite straightforwardly achieved by sealing the mouth shut, as people can only taste things in their mouth.

Someone in sensory deprivation, especially if it is total or nearly so, will experience time distortion. Most likely, this distortion will mean that a few minutes of real time can seem like as much as an hour to them; their tolerance should be measured in their perceived time, not real time. Under some circumstances, such as during extended orgasm[wipi] or sensory pain[wipi], the opposite can occur and what may be two hours or more could seem like just a few minutes; this can affect their dehydration and also leave them with an unhappy feeling of having lost a part of their life, despite having just enjoyed themselves.

Though sensory deprivation has been shown to have some therapeutic benefit if applied over a short time, long-term sensory deprivation is very dangerous and is considered to be torture[wipi] by most human rights groups. Therefore, it is strongly advised that any session[wipi] involving a high level of sensory deprivation be limited to no more than one hour. Also, it is doubly important that the master/dominatrix be conscious of the mental state of their sub[wipi].

One way to offset the danger is to practise partial rather than total sensory deprivation. For example, the use of a blindfold alone, even over long periods of time, will not usually cause mental distress. However, care must still be taken as, left to their own devices, a blindfolded sub can easily become disoriented and injure him or herself.

Naturally, all safety guidelines pertaining to suffocation, nerve damage, circulation, and so on should be followed as well. See Bondage: Safety[wipi] and Breath control: Safety[wipi].