There has been a massive right wing hijacking of men's rights. Even though some of the earliest men's rights advocates were left-wingers (like Ernest Belfort Bax[wp]), the vast majority of men's rights activism through the past 100 years has largely been right-wing and conservative in nature.

This is very problematic, since right-wing politics is incompatible with pro male politics.

Feminism is not socialism

Despite what right wingers say, feminism is not, "socialism in panties". And that claim is just a barefaced lie that can be dismissed out of hand. In fact, the opposite is true, as is very easy to figure out. 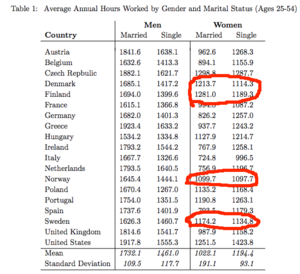 The hours work gap between the genders. Notice married men work more than single men. These are gender roles women demand off men.

Female sexuality due to its hypergamous nature, is in fact highly elitist. It is obvious that female mate selection is one of the main drivers of class and caste division. Men have great anxiety about being deselected due to being low status, because women are less likely to pair with them, and more likely to exclude them from social circles and thus marginalise them even further.

Women will deselect humble meek, harmless men. They will do this while calling them creepy nice guys, implying they are dangerous. Women will focus on trying to date men with status, even if they are criminals who harm other people. Also male luxury spending is designed to signal status to women, and is very wasteful.(Men buy luxury housing to try and attract high status women for example.)

Feminism does nothing to address these issues, because feminist females are hypergamous just like every other type of woman. In fact feminists will gaslight men and claim it is men who enforce gender roles, when it is women wh do so.

Right wing politics is full of angry, deselected, low status men, who have a girlfriend guarding fetish. These men often hate other men, as they see them as rivals in regards to mating. A lot of these right wing men become social Darwinists. The MGTOW named Turd Flinging monkey and the anarcho-capitalist, white nationalist Stefan Molyneux are classic examples of this. These Right wing men often cling to debunked pseudo science to rationalise their hostility towards other men. These men try to pretend they are being descriptive, but their real motive is to imply the need for certain social policies that would lead to the deaths and suffering of countless millions of low status men. (The abolishment of welfare is a common position these men hold.)

A lot of men's rights activists who seem to be sane and reasonable, and are moderate conservatives, often tend to drift rightwards on the political spectrum, and become more insane as time goes along. Paul Elam, a founder of A Voice for Men, is a prime example. At one point, he was against traditional conservative ideas when it came to gender roles, but now supports social Darwinism[wp] and hierarchy of competition between men, because it is, "only natural".

The biggest men's rights activist of them all: Karen Straughan, followed a similar pattern to Paul Elam. Karen went from a moderate conservative, who even saw the need for a welfare state, to a Neo-Nazi enabler who didn't even support equal domestic violence funding for men at the same level to women. Karen also did some dishonest talks at a libertarian conventions called, "feminism is socialism in panties". She even falsely claimed that the Seneca Falls Convention was Marxist in nature, even though it was made up mostly of Protestant and Quaker Christians. Feminism has strong origins in Protestant sentimentality and worship of women. Of course, this is a fact her right-wing Christian audience does not want to hear, and so Karen resorted to bear faced untruths.

Sargon of Akkad is another person who showed interest in MGTOW and men's issues, who seemed to be a moderate, but who took a severe right wing swing as his channel grew more popular. Sargon seemed to be obsessed with fighting Islam, and claimed there was a need to bring back Christian values.

Also, not only do right wingers not make good men's rights activists, they do not have a good track record of being loyal to the their professed cause. One of the most shameless examples of this is the author of the Spearhead Blog, Bill Price. The Spearhead was a reactionary right-wing anti-feminist, men's issues blogger who shut his site down after he got married to a feminist. The Spearhead was perhaps the number two men's rights site on the internet at one point.

This link talks about Bill Price taking his blog down http://archive.is/H1Ck1

Proof that r/mensrights is too right wing