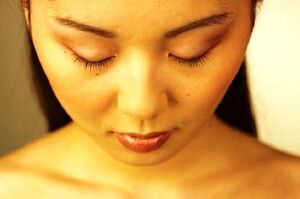 This is done as a general way of emphasising hierarchy in the relationship but is also used as a tool for humiliation, with the idea being that the submissive is not worthy of looking in the eye of the superior dominant.

This practice is a mainly psychological activity.

Avoidance of eye contact is commonly maintained through the submissive having to look at the floor, with transgressions normally punished through punishments such as face slapping[wipi]. In other cases eye contact restriction can be enforced through the use of a blindfold.

In the Story of O[wipi], the slaves at Roissy are prohibited from looking into the eyes of the masters.

In the Gor novels written by John Norman, kajirae can be prohibited from meeting the gaze of a man, or even from looking above the waist of a standing man, as part of certain types of training, and some positions[wipi] require downcast eyes, but there is no general prohibition.