Thomas James Ball (1953-2011) was a soldier, a father, and a men's rights activist. He came into the national spotlight through his self-immolation, an act of protest against feminism, family courts, and misandry.

Thomas James Ball was born on February 21, 1953. He grew up in Holden, MA and graduated from Wachusett Regional High School and the University of Massachusetts at Amherst. Ball was a Sergeant in the Army National Guard. After 21 years of service in the armed forces, Ball worked in the private sector as a service advisor for New England car dealerships. He eventually moved to Winchendon, Mass, with wife (at the time) Karen Ball and their three children (Sara J. Ball, Melissa A. Ball and Kevin T. Ball). Thomas and Karen Ball were married from 1990 to 2002. Karen Ball filed for divorce in April 2001. Ball was having difficulty finding work to pay his court mandated child support payments, and at the time of his death he was facing jail for owing about $ 3000.[1] The finding of contempt filed on June 6, 2011 in Cheshire Country Superior Court ordered Mr. Ball to jail: 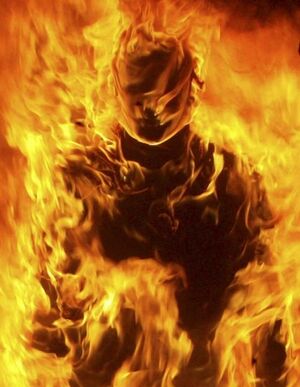 Thomas Ball's immolation:
"He died for your children" 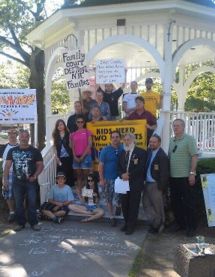 Thomas James Ball's self-immolation[wp] took place near the main rear entrance of the Cheshire County[wp] Superior Court House, sandwiched between the Ashuelot River and Robin Hood Park. Just before 5:30 on the evening of June 15, 2011, he doused himself with gasoline and set himself ablaze, in a calm and confident manner. Witness Sean Desio described Ball's demeanour as "like he was just chilling there, doing yoga or something."[6] After the fire was burning, Ball refused help from several nearby men.[7]

Ball made no sound while he was burning. Witness Dan Koski describes "I saw a man standing on fire. He walked around a little bit, walked on to the grass, collapsed on all fours and literally sat there and burned." After Ball collapsed, witness Jerry Goodrich describes the intense flames as being "over his head, and when he was on the ground, they were probably a good foot over his body".[7] Thomas James Ball expired a few minutes after setting himself ablaze.

At first, coverage of Thomas James Ball's suicide was limited to local news organizations such as Free Keene. Various men's rights groups discussed Ball's actions, his motivations, and his mistreatment by family courts. [8] [9] [10] [11] [12] The event was first carried by the national media when the International Business Times ran a story on June 17.[1] Coverage expanded after that, including mention on presidential candidate Ron Paul's[wp] web site [13] and on the Lew Rockwell's[wp] web site. [14]

Ball sent a "last will and testament" to a local news organization, the "Union Leader", explaining the motivations for his self immolation.[15][16] Bell's statement is critical of family courts and Child Protective Services (CPS). This may have played a part in Bell's decision to take his own life. According to research[17] approximately 330 people commit suicide monthly in the U.S. in response to the way family courts and CPS handle divorce, domestic violence and child support. The study points out that the suicide rate for divorced men is 9.94 times higher than the suicide rate for divorced women.[18][19]

Ball concluded his letter with parting words for his children:

Amanda Marcotte[wp] has finally responded (according to Ball's suicide) on her twitter: